1. Beautiful, amazing, something we could never do ourselves

2. Something stupid that even a child could make

Both of these are thoughtless dismissals that don’t have too much to do with the art itself.

One of the greatest lessons I’ve taken away from my time in grad school is how to figure out why I do or don’t like a work of art and to start to understand why something that I don’t like is valued differently by others.  There has to be merit to something that was chosen by an educated curator to take up expensive gallery space. There has to be some sort of reason that this piece has notoriety. Trying to figure out that reasoning is usually the first step for me to begin to expand my interpretations.

Vito Acconci is the first artist that made me say “that is not art.” My reaction to his work both intrigued and excited me. 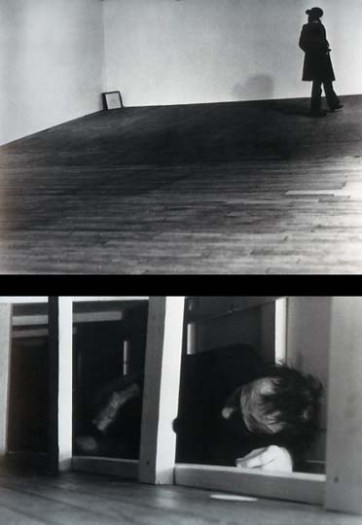 Over the course of three weeks, he masturbated eight hours a day while murmuring things like “You’re pushing your cunt down on my mouth,” or “You’re ramming your cock down into my ass.”

The piece showed no sexual content; it was all merely suggested, yet – at least to me – still extremely disturbing.

Why is this considered art? I hate it so much!

I always first try to consider how any work I don’t like ties into an artistic tradition.

This work, though not minimalism, echoes some of the tenets of the movement.

Minimalism deals with how the viewer interacts with the piece. Can you see yourself in the boxes? Can you see the entire box? Can you almost see the entire box? These interactions depend on a few different factors:  the height of the viewer, how close they stand to the work, from which direction they approach the work, how closely they pay attention to the work, etc. At this point in history art has gotten very cerebral. Theoretically, every single person who walks into the gallery has an experience tailored to their own physiology, mindset, and path through the gallery.

A similar interaction exists with Seed Bed. In fact it seems that the only, ahem, product is the interaction and the impression left in the gallery visitor’s mind. Does walking into this gallery confuse you, make you feel violated? If so why? Does it make a difference that the artist wants you to know what he’s doing? Does the concept behind Seed Bed make a difference?

One of my issues with body art such as this is that it feels less like art and more like we are witnessing the artist’s dysfunction. But there is so much art that is considered beautiful that we also know to be a way the artist expressed various dysfunctions. Does expressing a dysfunction through art lift the taboo associated with it? Does that art HAVE to be considered beautiful? And, of course, can a concept make a work beautiful even if the art is not something you consider beautiful?

In doing some fact checking I learned that Marina Abramović re-created Seed Bed in 2005 and my first reaction was, “what did she do that for? Oh come on!” So I clearly have not come to terms with this work.  http://pastexhibitions.guggenheim.org/abramovic/

Though Seed Bed is one of the most problematic works I’ve encountered, somehow it has become one of my favorite pieces to talk about; I’ve brought it up during many conversations with people about art. Often people are shocked and disturbed by this work, which makes me defend it to them, as I worry that they are dismissing it without trying to understand anything about it. This has complicated my feelings towards Seed Bed even more.  Somehow it has grown into one of my go-to pieces to open a dialogue about controversial art, and that is something that makes it worthwhile to me.